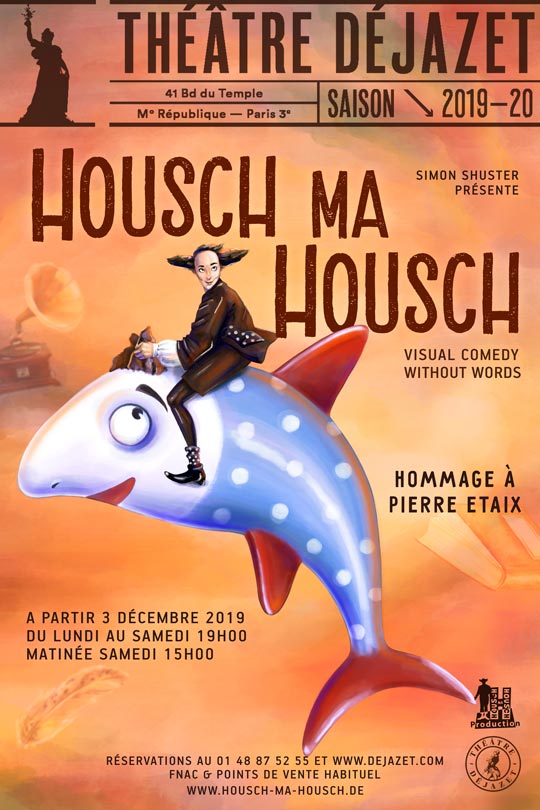 From November 3, there will be a big tour of Simon Shuster in France.

The spectacle “Housch-ma-Housch” will be presented on the stage of the Theater Déjazet, located in the center of Paris.

The creator of this spectacle is Simon Shuster, all his life he collected funny stories, magic words, learned to see a smile in every situation. Housch-ma-Housch- it’s a phenomenal charm combined with original pantomime, inimitable magic and unexpected humor.

An artist who is applauded in many countries of the world, a favourite of the audience, a recognized master of world comedy, gives his only performance for children and adults. Fairy personages remind people, and people resemble fairy personages. Matchless sense of humor, vivid images, authentic animation and affecting stories are waiting for you on the show of Housch-Ma-Housch.

Sincere stories from your childhood.

August 17, 2019 – the only performance from the fabulous Housch-Ma-Housch. An event not to be missed.

Leipzig met its favourite artist again! This time, Housch-ma-Housch presented his new show “Comerback: Paris-Monte Carlo-Leipzig” to the audience of Krystallpalast. Again, returning to cozy Leipzig, the artist touched the audience with poetry and magic of the performance to the depths of its heart, and also made it laugh to tears So it was in 2002 and 2009, so it was this spring of 2019, 10 years later. And now the best miniatures of this season conquered the guests and residents of Leipzig.

In the winter of 2019, the jubilee 100th season of the Krone circus was held. The best artists from different countries participated in the program. Among the acts in the arena of the old circus building in Munich, the performance of incredible Housch-ma-Housch was a special gem. He not only pleased the audience with his performance, but also the poster of the festive program was adorned with the image of this artist.

From December 6, 2018 to January 6, 2019, the largest circus Christmas show in Germany takes place in Stuttgart. For the 25th anniversary was created a grand show with the participation of 100 artists. Here you can enjoy the beauty of a classic circus and get real theatrical emotions. This is a great family event for spectators of all ages with the participation of Housch-ma-Housch. Don’t miss the show where you can feel the real Christmas miracle!

It was a joyful event for the artist.

This autumn, 2018, the audience of Kaliningrad had a big surprise. At the Art Festival “Baltic Seasons” they had a chance to watch the Housch-ma-Housch solo show. All tickets were completely sold out, it was a real success of the show. The love and support of the Kaliningrad audience, endless long applause with standing ovation left in the heart of Simon Shuster great warmth.

From 6 to 24 July a vivid, animated solo show „Housch-ma-Housch“ took part in the International Theater Festival in Avignon. At this edition of the festival were presented more than 1,400 different spectacles. With great success Simon Shuster performed 24 shows in 24 days. It was a real marathon of theatrical art and joy for the audience. The poster of the spectacle “Housch-ma-Housch” became one of the 25 best posters at the festival.

Every July one of the oldest cities in Europe – Avignon, turns into a grand theater, the streets become a stage. There come hundreds of thousands of spectators and artists from all over the world. From 6 to 24 July 2018, Simon Shuster will delight the audience at the 72nd Festival D’Avignon, in the cozy “Collège de la salle” (3 Place Louis Pasteur, 84000 Avignon), every evening at 20:20 ( except Monday). “Housch-ma-Housch” – is a new unique spectacle illustrated with authentic animation. Performance for true connoisseurs of real art, for spectators of all ages. Come laugh together with Housch-ma-Housch and you will come back home with a handful of good vibes colored in white polka dots.

Only three days, from 21 to 23 June in the very heart of Berlin, you can see the new One Man Show of Simen Shuster “Housch-ma- Housch”. For the first time on the German stage Pfefferberg Theater at Schönhauser Allee 176, 10119 Berlin, Germany, every evening at 20:00, and on June 23, at 15:00. The character of the performance “Housch-ma- Housch” will touch you to the deep of your heart and will also make you laugh to tears.